Today is the second anniversary of our son’s death. Like last year we will be lighting floating lanterns for him tonight with our close friends. At his first anniversary we were watching the lanterns when a marvelous shooting star appeared. We like to think of it as a sign. Don’t get me wrong. I have never been superstitious, I don’t read horoscopes and I certainly don’t try to make things fit what I want to believe. But that night has been a cloudy and rainy night, but for a few moments the clouds broke up and we could see the stars when the shooting star appeared.

A few days ago we bought a hummingbird feeder. We love hummingbirds, not only since our babies died. But especially since then because they have meaning for us. We use a hummingbird as a logo for this site. For days we were waiting for the first hummingbird to appear and do a taste test on our feeder. To no result. So today, on the anniversary of Marlon’s death we sat in the living room and I said to my wife: “Marlon died at 3pm. If a hummingbird appears at that time, it will be a sign”. 3pm passed and nothing happened. Disappointing. As soon as we stopped watching the feeder and went about our business, a hummingbird appeared. It was 3:18pm. We could not believe it. So I said, once might be coincidence, twice will not be. And sure enough at 3:52pm another hummingbird came along. This time we were prepared and had the camera ready (we only then realized that we should have cleaned our window). 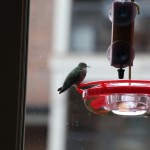 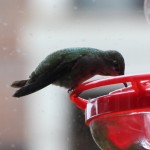 Others might see this as pure coincidence. We see it as signs.

Marlon, I dont’ want to put too much pressure on your little soul, but a break from the rain for a few minutes tonight would be awesome. Maybe that might be a little much to ask…